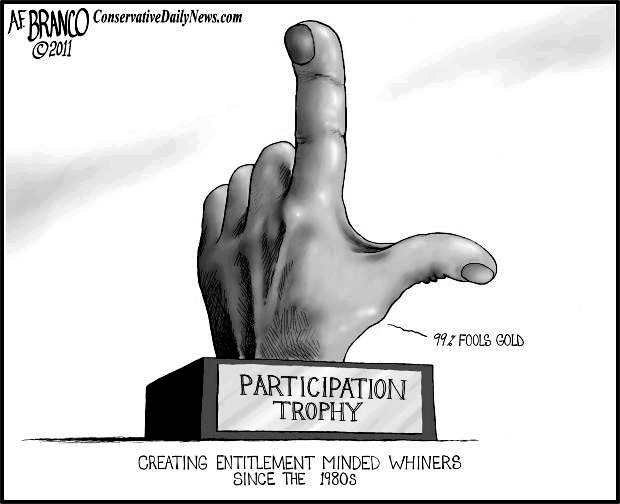 That participation in itself was worth as much as winning. Could this be the reason the Trump Candidacy scares the hell out of them. Imagine playtime in the schoolyard and actually sinking a basket, or hitting a ball. These are the children that spend years in therapy only to become Public Servants.

Remember, of the 17 candidates who were in the race only 4 to 5 ever had Private Sector Experience. The rest have been living of the Government and your tax dollars.

This false narrative has come back to haunt the Weak of Heart Party in the Halls of Congress. Being good bureaucrats doesn’t make good leaders.

The little lawyers of the pantyhose movement are in for a Huge surprise.

Here is what Trump could do;

Appeal to their sense of fairness and give them some time to come to the table in a real effort to coalesce around the nominee. Stop piling on with innuendo and false claims to slander the candidate who has beaten them in the majority of States with the Majority of Votes.

Explain that you will not release you delegates and rally them to either not vote, or to vote for Hillary. Seeing the level of animosity by other Republicans this action would seem appropriate.
Explain in detail that they will lose both Houses of Congress and the Supreme Court for generations to come.

Ask them whether their Personal Ambitions are more important than the party or the future of the nation.

Remind them that a Third Party run would destroy the Party.

Last but not least, they will not win a national election in their lifetime if another democrat gets in the White House.

For all of the pundits who have treated the Trump campaign
unfairly by promoting inaccurate rhetoric, here are a few facts;

Cruz won Utah because of the Mormons and Mitt the Hypocrite. If he wins Wisconsin it will be for the same reason, all  the candidates that have lost to Trump including  Ryan the loser in 2012 are backing Cruz in an effort to block Trump.

Don't kid yourselves, the Republican Establishment hates Cruz a little less than Trump. Their backing will evaporate if they can manipulate the Convention.

This is called stacking the deck unfairly not to win, but to block another from winning.

Sorry, that isn’t a methodology that breeds success either in the school yard or in the real world.

The Republicans  have learned a few things in their electoral loses. How to act just like the Democrats!
Posted by theodore miraldi at 7:40:00 PM