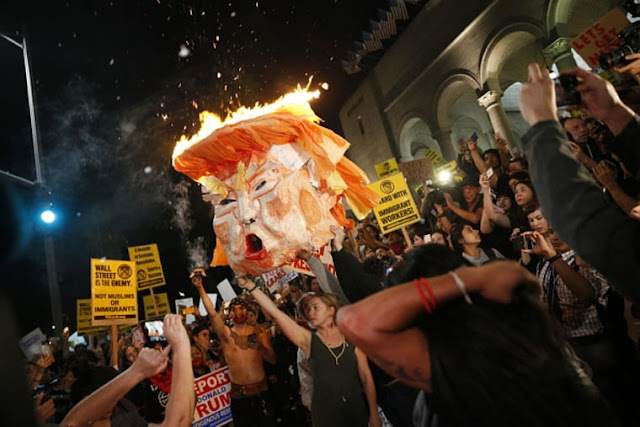 Thank GOD, the election is over. And just like Obama reminded the nation once before, 'Elections have Consequences.' Over the last 8 years the Left has run roughshod over nearly half of the nation.

Pushed every button to incite Divisiveness.

Passing the largest piece of legislation since FDR without one vote from the opposing party. Lawyers signing a bill without even reading it. Would a lawyer ever do that in their personal life? Not a chance. This particular act by Obama with the support of Hillary Clinton was the beginning of an administration that had no respect for anyone who would disagree.

Instead of the left realizing the gift of a confused Congress and population, Obama and his deceivers doubled down ramming through Executive Orders and Regulations on a nation afraid to challenge our first Black President on context and intent.

On this premise was built the abusive nature of a Socialist inspired president and a party that little resembles Democrats of the modern age.

Gone were the master negotiators replaced by a Gestapo like mentality that demanded such ridiculous things like Transgender Bathrooms, and Gay Marriage. And they called this rational. In any age, there are fringe elements that demand out of norm behaviors that challenge beliefs systems.

Life's challenges balance our existence, but do we learn?

The results of this election was a major change in course by rational voters. Voters that wanted honest
answers to real problems. Conclusions based upon conception of rational policy that made life better
for most Americans, and not just the few.

And so we have President Elect Donald J. Trump, a straight shooter in the land of Oz. He  promises to Drain The Swamp that has taken root in Washington. Vermin that have been promising the public solutions aided by more taxes and failed policy.

Insults and Hyperbole' instead of Unity. How much longer did they think the American public would stand for lies and corruption. I guess knowing your neighbor really does matter.

Unfortunate that the responsibility to our families and neighbors was weakened by a narrative of distrust and racial discourse. Who could have seen it coming from an African/American president
and a loving Democrat Party.

As a result there are thousands of disenchanted people protesting the election results. Yet instead of calming the storm, the Kumbaya Party is fanning the flames of violence.

Like Trump or not, it's nice to have an adult running things again.
Posted by theodore miraldi at 6:52:00 PM