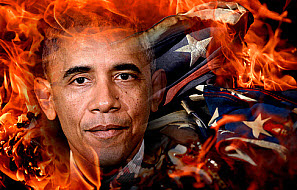 Before we run too far off course with regard to the Massive Corruption throughout our Institutions, let's take a look at its architect...Barack Hussein Obama.

Barack Obama, our One and Only Affirmative Action President in History was woefully unqualified using the most generous variables, to be elected to our Nations Highest Office.

Obama graduated a Political Science Major with No Honors. As Editor of the Harvard Law Review Obama never wrote a bylined piece as editor. Obama never started, or owned a business, therefore had no business acumen to get the nation out of the recession. It's why he surrounded himself with academics and minorities, not for diversity, but to never be challenged, knowing his soaring oratory skills were the sum of his skills and dazzled Intellectuals.

Barack's sketchy origins seems more like a table-top novel than a profile in character. His association with Terrorists and Venom spewing, Anti-White, Anti-American Rev. Wright,  his moral counsel for  over 20 years of his young life.

Obama was just another shake-down artist from Chicago. Extorting capital from businesses who didn't fold under his racist pressures.

His Family riddled with Communist and Socialist Narratives, became his Bible of Disruption.

Barack Obama bought peoples silence through Subversion, Tribalism and Racism. It became evident by his one sided comments throughout his tenure that Obama was a BULLY.

Obama likely never had an Original Policy Chop in his life. He used the thoughts of others tired policy initiatives.

Let's be clear Obama was weened by one the the Most Corrupt, Local and State Governments in the nation.

In this knowledge, he seeded our Institutions with Sycophants, Bootlickers, Flunkies, Lackeys and Stooges who willingly did his dirty work.

So, after 8 years of Government employees who kissed up to gain advantage, they are now faced with Investigations and possible Criminal Indictments. Never expecting to be out of power, expecting a Clinton win.

In their hysteria, thinking Hillary would win in 2016 they become arrogant with power and became sloppy.

So here we are, a corrupt Special Counsel, a Corrupt FBI and a Politically Motivated DOJ, that did everything possible to let Hillary go free in lieu of profound evidence she committed, serious breaches in security concerning Classified Information.

The Role Model for all of these miss-guided Officials...

theodore  MIRALDI .  edited 11/24/20 Where to begin ... There's another Pandemic in our nation that has infected half of the population,...