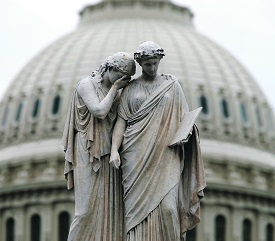 Even with a paltry effort, it shouldn't be difficult to pick any nation in the world and know whether it has sustained a level of success in modern history. After you eliminate any humanitarian aid from the outside to help lessen mass starvation, lack of clean water and poor socio-economics, the results are plain to see.

Some Cultures have known incompetence throughout their history. It's just the way it is. There are countries that are so embedded in belief systems and minimally socialized, mechanical societies, that even the infusion of modern narratives has little to no effect upon their Ideology, Institutions, or Social Evolution.

So, that being said, let's focus on the fixable problems we are facing here.

For the most part of the 242 year old United States, we have been a pro-active and productive society. We have conquered the Wilderness, learned how to Clothe and Feed our people. And in the face of enormous challenges, we as a people have vanquished our enemies and restored peace, not only to the World, but also within our own country. We have created and sustained one of the highest standards of living for the better part of 8 decades.

A rational mind would have pride in the past and continue toward the future with solid economic and social policies.

We pride ourselves in the ingenuity and will to be the best we can be. This wasn't just an American invention. This is what the Immigrant Population brought with them from mostly Western European Cultures. It would be incorrect to assume all that was valued came from Europe alone. The Sciences, Mathematics and Languages that originated from around the world have given us a better understanding of the world we live in, and our ability to incorporate the best the world has to offer.

This has been achieved with enormous cost to our Fore Fathers. Over 1,264,921 Americans have defended and died from the Revolutionary War to the War in Afghanistan. These are only those who perished. The number of wounded is far greater.

Mind you, it would be ludicrous to state that American Culture has been perfect, or even near perfect but, we have managed the downside of social dysfunction rather well. Up until NOW!

We are a relatively new nation. The Roman Empire is not just one of the most industrious in history; it's also the longest-lasting, spanning several different eras, lasting from 27 B.C. to 1453 A.D.  Totaling 1,480 years.

Like many other great nations there are several precursors to their demise.

And like any other times Sex, Drugs, and Rock 'n Roll of the period played a significant part to a nations demise. Although the disappearance of Natural Resources, Economics and Invaders are right there at the top.

The Sexual Revolution of the 60's turned American Culture on its tail...Literally. No longer was having sex a commitment, but a purely sensual experience. The Sins of the Flesh became Mainstreet.

It's not that males had devised a narrative to get what they wanted, women lowered the boundaries and permitted errand sexual encounters of their choosing. This heralded the Death of Family Values and responsible Sexual Behaviors. Like it, or not once the cat was out of the bag almost everything that followed was at its core diminished.

What we face today are epidemics of STD's, AIDS and other Sexual Dysfunctions, including poor performance anxieties. So, by the very nature of promiscuity life changing negative outcomes through Hyper Sexuality are created. Try telling your adolescent child with raging hormones that sex has consequences.

ABORTION: 60 Million lost lives since Roe v Wade and the consequences on American Culture. Mind you, I'm an ardent advocate for Women's Rights, but no human being, whether they be a man, or women has the right to take a life because of Bad Personal Behavior.

We all should be able to agree that Abortion was used as a form of Birth Control at its worst.

The Economic ramifications have been Substantial in Potential Contributions of 60 Million more Americans.

According to the Bureau of Labor Statistics, Social Security Administration, Guttmacher Institute, and National Center for Health Statistics, if abortion had never been legalized in 1973, more than 17 million people would be employed, resulting in an additional $400 billion from those workers, with $11 billion contributed to Medicare and $47 million contributed to Social Security. Although it is important to also reduce government spending, these added incomes would nevertheless help the country.

Replacement of an aging population and fewer children being born is over-burdening our Social Systems. The slow growth in the United States population seen in recent years is due to immigration and people living longer.

What is happening in the United States today isn't called Legal Immigration. It's actually an Invasion!
When a Foreign Government Enables and Promotes its Citizens to Break Federal Laws of another country and Gain Access, it's an outright Invasion.

The negative efforts of approximately 20 Million Undocumented Aliens is having a negative effect on both, our Economic and Social Systems.

The economic impact of Illegal Immigration in the U.S. is costly, and impacts the financial security of the county's legal residents. This impact plays out in a number of ways.

Illegal Immigration Reduces Wages. Those unregulated workers are often underpaid, which keeps wages lower in a particular occupation and region.

Illegal aliens can put a financial burden on local and federal law enforcement.

Immigrants on average tend to have larger families that those in the U.S. This difference can strain the resources of local school districts.

What does this have to do with American Culture?

It's one thing to assimilate small populations from Foreign Countries, several hundred thousand at a time. It is quite another to successfully introduce large populations that cluster and initiate their own Cultural norms excluding assimilation possible for generations. This is counter intuitive to what's best
for America. Large sub-cultures carving out American Territory. Many of which are here Illegally.

Believe it, or not many of our neighbors don't like us, and as someone who lives in an Immigrant Community, I can testify to that being true. There have been some NON-ENGLISH Speaking residents that have told my wife and I to leave, because we didn't belong. Can you imagine and Immigrant telling an American Citizen that?

Bad Culture...You Bet! Just imagine what our children are putting up with in school.

Bad Culture has driven hard working Americans out of our Cities and Communities. Why?

The United States now has the Largest Immigrant Population in its History.

The massive influx had even more unseen consequences in a host of long gone medical conditions that were wiped out decades past. Un-vaccinated individuals heralded the return of :