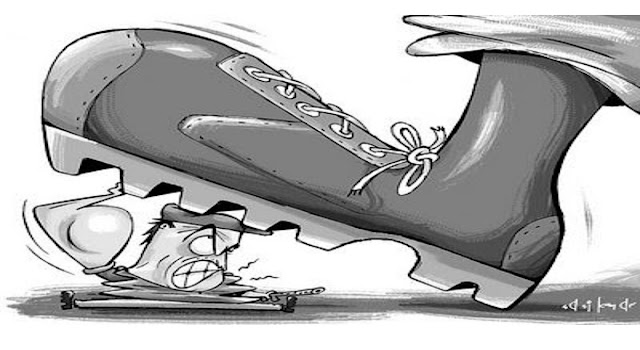 Our Founding Fathers etched the words that heavily weight on the continuing success of our Republic. As Jefferson once said, 'When the people fear the government, there is tyranny; when the government fears the people, there is liberty.'

We are at the crossroad of making a choice that will affect the lives of those who follow. Washington said it best, 'Government is not reason, it is not eloquence, it is force; like fire, a troublesome servant and a fearful master. Never for a moment should it be left to irresponsible action.' And so, today we are facing the Evils of Corruption. And with it brings the match that will ignite the fire that Tyranny and Sedition places in our path.

The Evolution and Intent to Seize Power from the mechanism set forth in our Constitution are being applied by a Bureaucracy of UN-Elected Sycophants who favor self affirming affects. Men and Women who see themselves above God.

How easy then, to see themselves Above the Law.

The self affirming and its gang of Seditious followers Lust for Power more than their need for Freedom, or Liberty. So assured of their safety among the mob, their behaviors become more egregious and frequent. To them Lying is a tool used to gain a sympathy to move their Evil Contemplation and Sedition.

The Straw Man being used by this Tyranny is Putin and Russia. Again, we have been warned by those who cane before us. 'I believe there are more instances of the abridgement of freedom of the people by gradual and silent encroachments by those in power than by violent and sudden usurpations. ... The means of defense against foreign danger historically have become the instruments of tyranny at home ... If tyranny and oppression come to this land, it will be under the guise of fighting a foreign enemy.' Madison

For my fellow citizens who would spent their time criticizing others by fashion of mere allegation, take pause in these words;
Matthew 7:3-5

Greater Men than Ourselves set the course of this nation. It's time to heed their warnings!

'When once a republic is corrupted, there is no possibility of remedying any of the growing evils but by removing the corruption and restoring its lost principles; every other correction is either useless or a new evil.'— Jefferson

There is a New Progressive Fascism on the Left. Where God, Liberty and Freedom are only for those who march in Lock-Step. Sounds like King George III to me!

Democrats: From Lawmakers To LAWBREAKERS

theodore   M I R A L D I . The slow crawl of Socialism has once again reared its ugly promises at the weakest among us. This we...